From our nation’s inception, we have had a mix of gun rights and gun control. 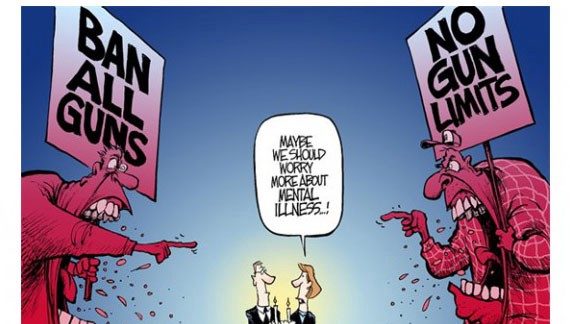 British royalists were banned from owning guns after the Revolutionary War. Blacks and Indians were banned from owning guns. The legendary gun fight at the OK Corral happened because the Clanton’s wouldn’t turn over their guns to Wyatt Earp in violation of Tombstone’s gun ordinance. Even Governor Ronald Reagan and the NRA supported the 1967 Mulford Act repealing a law allowing the public carrying of loaded firearms because the Black Panther Party (BPP) was conducting armed cop-watching patrols of Oakland neighborhoods. Reagan supported the Brady Handgun Violence Prevention Act, named for his press secretary shot during the 1981 attempt on Reagan’s life. That bill passed in 1993, mandating federal background checks and a five-day waiting period.

In 2008, the landmark case, District of Columbia vs. Heller, the U.S. Supreme Court ruled that the Second Amendment protects an individual’s right to possess a firearm for self-defense unrelated to service in a militia. Justice Antonin Scalia handed down the majority decision deeming many forms of gun control to be constitutional. “Like most rights, the right secured by the Second Amendment is not unlimited,” Scalia wrote, Nothing in the opinion should “be taken to cast doubt on longstanding prohibitions on the possession of firearms by felons and the mentally ill, or laws forbidding the carrying of firearms in sensitive places such as schools and government buildings, or laws imposing conditions and qualifications on the commercial sale of arms.” Scalia also suggested that bans on “dangerous and unusual weapons,” such as machine guns, where constitutionally permissible. While there was a right to bear arms for individual self-defense, the right was not “a right to keep and carry any weapon whatsoever in any way whatsoever and for whatever purpose.” Scalia implied that the right recognized by the Court might be restricted to the home. Individuals did not necessarily have the right to possess a weapon in public. (1)

Assault Weapons Ban: When it comes to a ban on semi-automatic assault rifles, I disagree.  In fact, there are higher caliber semi-automatic weapons that are far more destructive than so-called military style assault rifles. They’re only machine gun replicas and not fully automatic. Banning both types of weapons would only serve to punish recreational gun owners and serve no public safety interest.

Background Checks: I think Antonin Scalia was right and that “longstanding prohibitions on possession by felons and the mentally ill…were constitutionally permissible.” So I don’t see a problem with reasonable gun control bills containing a background check. Because most firearms deaths are suicides, not to mention the suicide-murderers, to put murder-suicide in the proper mental sequencing, I would support an immediate temporary restraining order on anyone who has been admitted for medical treatment for suspected self-inflicted suicidal wounds and included on a background check. That restraining order should become permanent if the court confirms that it was a genuine suicide attempt.

Bans on Dangerous and Unusual Weapons: I agree with Scalia that license bans on “dangerous and unusual weapons,” such as machine guns, are constitutionally permissible. So, I would support a ban on slide-fire stocks, or so-called “bump stocks,” as trigger activators for semi-automatic firearms depending on the bill.

Magazine Size Limits: It seems pointless to me to limit magazine sizes since it is so easy to construct a plastic box with springs, modify an existing clip to hold more ammunition, not to mention 3D printers. Also there are a lot of large magazine size clips in circulation. Mass shooters also carry multiple guns too. While there seems to be good reason to believe that lower clip sizes might reduce the numbers killed in mass shootings, what limits are reasonable and where does it end? In general, I wouldn’t support a ban on the possession or use of standard and high capacity magazines, although some high capacity magazines are useless and absurd.

Age Limits: There doesn’t seem to be much reason in our state to change our law from 18 to 21 years of age to purchase a firearm. Are we going to tell a voting age adult, “No, you can’t bear arms in the military?” That’s nonsense.

Approximately 33,000 people die per year from gun violence. Of that number, a largely preventable, 66-percent are suicides and accidents. What are we doing to identify the causes, nature and control of suicide and depression? A credible “Interpersonal Theory of Suicide” has been put forth by Thomas Joiner, Jr. in his groundbreaking book “Why People Die of Suicide.” When three components exist simultaneously—thwarted belongingness, perceived burdensomeness and acquired capability (fearlessness), suicide becomes strongly predictable. There is a difference in suicide risk between those who don’t know anything about guns and don’t own them and someone who has practical access to and familiarity with a potential means of suicide. As governor, I would address this issue. This is a good reason to support Single-Payer Healthcare in order to address the mental health issues of all Minnesotans.

Among homicides nationally, 1,100 are prohibition related, meaning, caused by the War on Drugs.  In 1934, the National Firearms Act was passed banning machine guns because of gangster preference for the Tommie gun during alcohol prohibition. Even then, most of the prohibitionist-caused gun deaths weren’t from machine guns. Yet, even before the passage of the National Firearms Act, murder and assault by firearms was plummeting because of the repeal of alcohol prohibition, and did so for ten years in a row. Despite the fact that 1,100 deaths per year are 2-to-5 times as many deaths as the highly publicized mass-shootings we witness yearly, there seems to be no outrage over the prohibition-related gun deaths. Where’s the outcry for the repeal of narcotics prohibition? Apparently, gun control advocates are just as hypocritical as the National Rifle Association (NRA).

We have to get realistic. Often people in the gun control community believe that you can get rid of all the firearms. Believe me, with 320 million guns in America, it’s not happening. Likewise, opposition to reasonable gun control by the gun lobby is equally unrealistic.

We seem to be mired in the debate between the two extremes of the gun nuts and the gun grabbers. Too many Americans believe we have a right to bear arms or a right to gun control, but not both. The Second Amendment’s history and text tells us otherwise. I’m here to tell you, “We can have both.” We can have the right to bear arms and reasonable and effective gun control at the same time.

The gunfight has been used as a ruse by politicians and their wealthy campaign contributors to divide us against our common interests in order to win elections. And while we’re fighting it out they’re laughing all the way to the bank. And we’re such suckers, we fall for it.

My views on addressing gun violence are still evolving, but I believe we can begin with preventable gun violence.

(1) Gunfight: The Battle Over the Right to Bear Arms in America, by Adam Winkler pg. 279.