Take Back the Money Power

Most people have no clue how money comes into existence. When private individuals create money out of nothing, it’s called counterfeiting. When un-elected private bankers commit this so-called fraud on the sovereign people, they dignify it as Fractional Reserve Banking.

Fractional Reserve Lending is a system in which bankers only need a fraction of reserves in order to issue many times the reserve amount in loans. 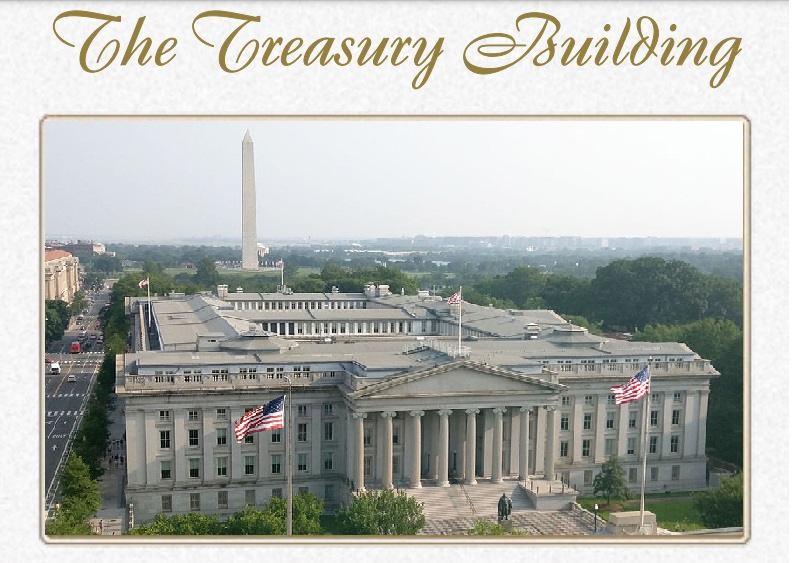 Bankers create our money supply by using $1 of reserves to create $9 of new money/loans. An individual by contrast, must first save $1 to lend $1. If a person could create nine dollars out of thin air with just a dollar and charge interest for it, then anybody could rule the world. Wealthy individuals receive the lowest interest rates while the rest of us borrow at high interest rates. In other words, money is created at the top of the wealth pyramid to benefit the top of the pyramid. This is avalanche-up economics.

Why pay interest on money the government can create without interest?

Debt isn’t real money because if all debts were paid back, then there wouldn’t be any money. In other words, beware of paying off the federal debt too quickly, you’ll tank the economy.

The Bible says, “[T]he borrower is servant to the lender.” When our government borrows from bankers, we lose democratic sovereignty to the lending plutocrats. The Federal Reserve Act, gave banks the money-power to create our money supply as debt, it sanctioned bankers as the ruling class, and able to direct our governing policies. To call this a rigged economy is a colossal understatement.

By controlling the money-power, banks can expand and contract the money supply, causing booms and busts at will. The tremendous power of the ruling elite to tank the economy in order to hold on to the money power means it will take TREMENDOUS national courage to change this fraudulent system.

Fractional reserve lending demands perpetual and unsustainable growth in order to pay the interest on the principal. Economist Kenneth Boulding said, “Anyone who believes exponential growth can go on forever in a finite world is either a madman or an economist.” https://en.wikiquote.org/wiki/Kenneth_Boulding

Monetary expansion is inherently inflationary. The act of expanding the money supply without their being a proportional expansion of goods and services in the economy will always debase the currency. Parity can only be achieved by strict control of the quantity of money. Issuing too much money will cause inflation. Issuing too little money will cause deflation. If we want to retain the value of our money we’ll need a monetary authority that keeps our money at a nominal value.

Fractional Reserve Banking is bad public policy because it legalized what was originally a criminal fraud, legitimized structural wealth inequality and created an un-elected ruling class. In a democracy, bankers should be our servants, not our masters.

Stephen Zarlenga, author of “The Lost Science of Money” said, “Over time, whoever controls the money system controls the nation.” In a democracy the “We the People” are the sovereign rulers with the power to issue money interest-free at the bottom of the wealth pyramid for the benefit of all. In a democracy, bankers should be our servants, not our masters.

How Can We Take Back the Money Power?

Let’s take back the money power with a Bank of Minnesota based on the publicly-owned Bank of North Dakota (BND) founded in 1919 which acts as a ‘Mini-Fed’ to the State.

The bank is the only legal depository for all state funds. Their mission is “to deliver quality, sound financial services that promote agriculture, commerce, and industry.” The founding legislative principle for the BND said, “BND is to be helpful to and assist in the development of…financial institutions and public corporations within the state and not, in any manner, to destroy or to be harmful to existing financial institutions.”

The bank has turned a profit every year since 1919. Profits from the bank are either deposited in North Dakota’s general fund, or are used to support economic development in the state promoting community lending, local business, and grassroots investment. The BND boosts locally owned private banks and credit unions.

Money any state collects from taxpayers and from the federal government, before being spent, has to be parked somewhere. North Dakota deposits it at local banks and credit unions, expanding lending opportunities for local businesses.

Chris Hedges said, “You can tell what the oligarchs fear by what they seek to destroy.” It shouldn’t surprise you that it was fiercely opposed by grain, railroad, and banking trusts who sought measures to prevent its creation in 1919. Today the BND is wildly popular in a state where 65% of voters are Republicans who voted for Trump, which suggests the bipartisan appeal of community capital that keeps money circulating within the state. Ignore the lobbyists from big banks, who detest the idea, and let’s set up a public Bank of Minnesota immediately. See https://en.wikipedia.org/wiki/Bank_of_North_Dakota

We need to reintroduce and support a banking regulation called the Minnesota Transportation Act SF65 and HF 610 as introduced – 87th Legislature (2011-2012). (5)

The Minnesota Transportation Act, formally called, “USE OF NEW WEALTH-BASED BOOKKEEPING ENTRY MONEY FOR TRANSPORTATION FUNDING,” can be enacted more simply than requiring an act of Congress and can be implemented as soon as the legislature passes the bill. In less than four months we could create jobs, putting people to work and paying them wages to rebuild the state’s crumbling infrastructure at no cost to the taxpayer.

The concept of the bill is to have state chartered banks issue bookkeeping entries as a way to put money into circulation that will be a direct payment for infrastructure without interest; in lieu of borrowing, bonding or taxation.

Under fractional reserve lending, banks normally create a liability on their books, meaning, debt-money created out of nothing, and then credit the liability as an asset in the borrowers account. If you can create money as a loan, then you can create money as an asset. In this case, state chartered banks create an asset spent into circulation as a payment for production done

Instead of creating and loaning debt into circulation as a mortgage on the production that was just done for the benefit of the banks, the state, counties and municipalities get the benefit. Since you can’t have local commerce without transportation, the whole system works exactly the same as it does now, except with one small accounting change in the genesis of money creation. In other words, we will be monetizing production of infrastructure for the benefit of the people without taxation and without borrowing.

Public infrastructure funding this way can be used to Combat Climate Change by creating municipal electric systems for wind, solar and storage infrastructure or statewide high-speed broadband infrastructure to serve local residents and increase the competitiveness of rural local businesses.

One proposed solution is for states to create their own credit. Article I, Section 10, of the US Constitution says that states shall not “emit bills of credit,” meaning they cannot issue their own paper currency; but there’s no rule against a state owning a bank that creates money with accounting entries, on accepted fractional reserve banking principles.

That option was the basis of an innovative bill called “the Minnesota Transportation Act” (MTA), which was heard in the Minnesota Legislature in March 2008. Drafted by Minnesota resident Byron Dale, the bill mandates state-chartered banks to advance funds for approved transportation projects in the same way that they make commercial loans—by simply “monetizing” the collateral, or turning it into money. Banks routinely monetize the promissory notes of borrowers just by making book entries to a checking account and saying “you have a new deposit with us.” Under the MTA, state chartered banks would create an Asset Monetization Account that would monetize the bid value of projects, turning them into money.  This money would not have to be repaid but would be considered one of those “investments” that banks are allowed to make with their “excess reserves.” (See Chapter 18)

It was a clever plan, but Minnesota legislators rejected it. They said, “Our banks don’t create money.” A website devoted to the MTA countered with these authoritative quotes:
“[T]he actual creation of money always involves the extension of credit by private commercial banks.” Russel L. Munk, Assistant General Counsel, Department of the Treasury.

“Money is created when loans are issued and debts incurred; money is extinguished when loans are repaid.” John B. Henderson, Senior Specialist in Price Economics, Congressional Research Service, Report No. 83-125 E.

“[T]he money that one borrower uses to pay interest on a loan has been created somewhere else in the economy by another loan.” John M. Yetter, Attorney-Advisor, Department of the Treasury.

In 2011, Dennis Kucinich introduced H.R. 2990, which would have ended fractional reserve lending, monetize the national debt, and instead of Americans going into debt to the banks, the banks would be in debt to Americans. No wonder it never made it out of committee. See https://www.congress.gov/bill/112th-congress/house-bill/2990/text

Likewise, in 2018, the Swiss referendum known as the Volgeld Initiative attempted to end fractional reserve lending too. Despite a campaign of confusion, misunderstanding, and fear from the Federal Council and the Swiss National Bank, an estimated 26% voted for the Sovereign Money Initiative. Had it won, it would have sent shockwaves throughout the world, because bankers would have been servants to the lender, meaning, the sovereign people. See https://www.vollgeld-initiative.ch/english/

In both cases, Kucinich’s bill never made it out of committee and the Volgeld was bitterly opposed by big money. You can tell what the oligarchs fear by what they seek to destroy.